Somatics has been defined as a ‘field which studies the soma: namely, the body as perceived from within by first-person perception’ (Hanna, 1986: 1). More precisely, it is an analytical study in the sense of studying perception, experience, and action as a mental moral and social agency; a pragmatic study by its methodologies to improve mindfulness and embodiment; and a pragmatic study by applying and testing with our own experiences in practice (Shusterman, 2005: 423). Somatic practices, as a discipline for movement and dance learning, relies on a fixed structure (visualization, micro-movement, improvisation, verbalizing) and can have differing functions (movement therapy, dance therapy, formalist movement analysis, wellness and embodiment in dance, etc.).

‘Mindfulness in movement’ is one of the key concepts of somatic practices (Ginot, 2010). It refers to the self-inward directed awareness or introspection used in the practices in the form of visualization exercises and introspective dances. These exercises are considered pragmatic strategies to improve more careful, attentive, penetrating, and precise awareness of sensations and experiences in movement and dance. However, research on somatic epistemology has confirmed that these key concepts are too vague and are therefore unreliable references for constructing general claims about the nature of somatic dance practices as dance research (Parviainen, 2002; Eddy, 2009; Ginot, 2010). I have to be careful in my research and not overidentification somatic practices with essentialist terminology, in the sense of fundamental principles. First, because any terminology only reduces the wide range of embodied cognitive states, experiences, sensations and feelings that are the building blocks in the knowledge production of somatic practices. Second, because a semantic analysis of somatic practices too easily invites a Cartesian understanding of the practices coordinated by dichotomies such as experiencing and thinking, practicing and theorizing, dancing and not-dancing, etc.

Antithetical principles of somatic practices as dance research
Somatic informed dance is considered more effective in its knowledge production when it is practiced by a calm soloist, who focuses on oneself and follows the flow of movement with a continuous and slow dynamic. The rationale behind this principle says that slowing down movements equally slows down the experiencing during the execution of these movements. This is a problematic strategy for a series of reasons. First, it imposes a value system onto movement- and psychodynamics, politicizing movement qualities in a practice that is grounded by its founders, and often still by current practitioners, in a naturalist or holist philosophy (Ginot, 2010; Cvejic, 2019). Second, the strategy contradicts the principles, because the tempo, duration and intensity of our experiences have no parallel relation. If this would be the case, optimized conscious awareness of dance experiences would only be possible during not-dancing.

The second principle dear to somatic practices that I want to address is the production of first-person verbal narratives on dance (in often non-native English) while sitting in a circle. These monologues have value as therapeutic and artistic materials due to their largely self-referencing and non-verifiable nature. However, study on somatic introspection by Richard Shusterman explained the default of these reflective exercises: ‘such reflective reporting requires descriptive or classificatory language; our introspective observation can error not only in misremembering but also in misdescribing what it perceives’ (Shusterman, 2005: 424-5). In other words, verbal reflections are miscommunicating the tacit and often-oblique experiences in dancing: they ‘de-scribe’ or ‘sub-scribe’ what is instantaneous, spontaneous and foremost embed in the flow of dancing. This principle thus adds to the difficulty of legitimizing somatic dances as a form of artistic practice-based dance research.

Researching somatic practices as a closed system of cognition
I propose a study of somatic dance practices in terms of an autopoietic system as defined by Humberto Maturana (Maturana et al., 1979). Dance research by means of autopoietic analysis focuses on the internal relationships of the principles, and not on their value or output. This means that my research is no longer focusing on if and how somatic practicing produces dance knowledge but explores the experiences and processes in somatic practices as dance knowing in and of itself. There is thus no other outside goal to the practice because the practitioner and the practice both play an equal part in the self-sustaining cognitive system. The positive consequences are that somatic practices are no longer defined by preconceived ideas such as ‘mindfulness’ or ‘extended awareness’. Further, it allows me to reconsider the rather docile or passive agency of the practitioner/s in the practice, as in the autopoietic approach the dance research subject emerges from the system through interacting or ‘enacting’ the knowledge operations of the practice. In other words, the somatic dance subject enacts experiential dance knowledge through practicing. 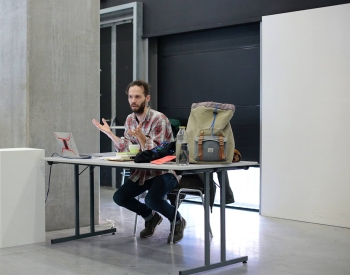